Ok, what is it I am not getting about the parking lot camper?

So as many of you know, we are one of the founding companies of the ARVC business forum. We attend all the meetings. This year the offsite meeting was in Phoenix at one of Scott Robert’s rv parks. Actually it is in Glendale on the west side of Phoenix. I took this picture of the window of my hotel.

My hotel was the Renaissance which was overpriced but that’s another story. This Renaissance Hotel is in a massive fairly new complex in Glendale where the hockey arena and the Arizona Cardinals football stadium reside.

So what is it I am not getting when it comes to parking in a Walmart parking lot or this case in the middle of a massive pavement lot in amongst a gigantic mall complex.

Why?
So this person has what looks like $75-$100,000 Fifth Wheel RV unit. If you look closely can see the duelly truck he uses to pull it. I was at this hotel for two nights and three days and he never moved. Looks like he is going to be there or has been there for a while. He has his stabilizer bars out, his barbecue, his carpet, his lawn chairs all the while taking in the spectacular view of the Burger King and Crate and Barrel store. 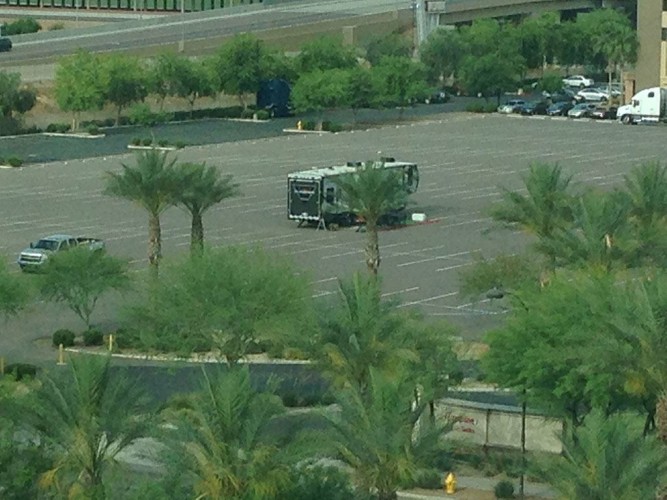 I just cannot make sense of this. I get you are trying to save cash by not staying at a campground however why would you spend all this money on hardware and have no services, no amenities, no activities, no views, no showers, no swimming pools, no grass, no trees, no security and no community. Why would you stay in a mall parking lot to try to save $40 a night? I just don’t get it. Think about the security issues around that mall when you are in sleeping. Now I don’t want to sound paranoid here but a lot of bad things happen late at night. So I see these people parking in Walmart parking lots putting out their satellite dishes their barbecues etc. And I think they are either living in their RV’s full-time (which is fine) or they’re just cheap. But in most cases owning buying and running an RV is not an inexpensive activity. That is the point I don’t get. This person obviously has money or has borrowed enough money to buy a duelly truck and a fifth wheel RV yet they park it and use it in the middle of a parking lot. For some reason it just does not make sense to me.

This guy has his cooler out, the stabilizer bars out, a nice little piece of carpet, lawn chairs and a barbecue. He is Is going to be there for a while I would say. What did Joni Mitchell say,” they paved paradise and they put up a parking lot”. This guy has stood that statement on it’s head.

Conclusion:
When I was on the road with my wife and our airstream for 6 months I asked people why they boon docked in parking lots and most said well we are just passing through so we just stopped for 5 or 6 hours in the Walmart parking lot. I said weren’t where you not worried about security or having a nice view or meeting your neighbors? In most cases people said no we just wanted to get where we were going. So maybe that’s the issue. Maybe we all need to enjoy the journey a little bit more then the rush to getting where we’re supposed to be going. I understand boon docking back in the wilderness where there are no parks but jeez.

It’s like buying the $1500 set of golf clubs and then not playing on a golf course because you think it is overpriced. Just does not make sense to me. Commens are welcome.