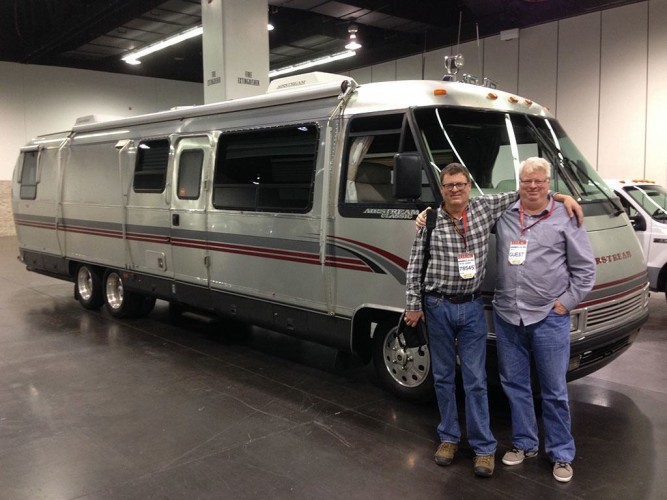 Introduction:
For those of you who know me, I hope you can remember when my wife and I packed the whole thing in and went on a 7 month RV road trip in October of 2012. We sold our house, she quit her job and we hit the road from Calgary Alberta which was our home for 23 years. Very exciting at the time and I still look back on it with fondness. The best part about it, we bought a 1996 Airstream Motor Home 36 feet long that was the last one off the line, ever. We bought it off a guy by the name of Joe Girard who is in the Guiness Book of World Records as the world’s greatest sales man. But that is a story for another day and believe me it is a good story.
This my brother and I posing at the Mecum Auction in Anaheim California on the day of the sale.

So the actual story of selling the Airstream goes something like this.

When the commander in chief and I got back to our cabin in Trout Lake BC in May of 2013 we settled into our new life in a very remote part of the Kootenay Mountains. We quickly figured out that the old Airstream was not meant for this part of the world. Lots of gravel roads and mountain passes which it is definitely not designed for. So we made the heartfelt decision to sell the old girl.

So with bugs bunny like $$ signs in my eyes I registered it for the the Mecum Car Auction in Anaheim Ca for the first week in December. There were 850 cars there, broadcast live on the Velocity Channel and a very big deal to the car culture. I had a full road trip guys weekend plan to drive it down to Anaheim and sell it at the Mecum Car auction.

So my brother , whom I love very dearly, decides to join me in my quest. The issue is he only has one speed and no filter if you get my drift. He likes to be in charge of any family event and it kills him not to be the organizer. However he agreed to let me run this show as there was a lot of money at stake. (Well if you call $30k a lot of money which I do).

So he makes way out to Trout Lake BC and we hit the trail at 6 am on the next day just before the first big snowfall of the season.

We planned to cross the border in Nelway / Mateline Falls WA. We had nothing of any note in the Airstream as we were going to stay in hotels on the way down. So as we pull up to the border I tell my brother, “Do not say a word, I will handle this”. I had gotten instructions from Mecum on how best to get vehicles across the border. I was totally prepared to answer their questions truthfully however in the most expedient manner to avoid any long delays or paperwork sessions.

So when we pulled up to the border the border guard came out and the first words out his mouth were, “What the hell is this thing?” That was quite common.

Then the following questions in order:

“Do you have any liquor on board?”

“Do you have any monetary instruments or cash on board totally more than $10,000?”

To which I answered every question truthfully. A couple of questions later he was preparing to let us go. I was thinking, what a nice guy.

Then his last question was,”What are you going to leave in the US?”

I was just about to say nothing when my brother who was doing very well to this point keeping his mouth shut, could not resist. He said “Well hopefully this baby!” as he tapped the outside of the passenger side.

Well that was not the correct response. Next came,”Out of the vehicle please”.

They ushered us into the “the box”.

We sat on a bench where they had a set of handcuffs attached to a pole.

What followed was 90 minutes of questions and phone calls to various border officials to try and figure out if there was any duty needed or for that matter if the old girl could even come into the US.

Eventually they released us and the Airstream to go on our merry way. The next 15 minutes on the road were in complete silence punctuated only by a string of profanity on my part ending with “You just could not help yourself could you?”

However an hour later we were best friends again.

Stay Tuned for Part 2 next week. If you have never been or want to sell a car in one of these gigantic TV auctions, let me give you the lowdown.