As some of you may or may not know we have a marketing relationship with the folks at Anderson’s marketing distribution. Now managed and owned by the wily Joe Tice, we participate in all the consumer shows that he attends. We set up a BookYourSite™ demo on an iPad and let the camping public experience the online booking system first hand. Whether you use our cloud computing system or the locally hosted version of our Campground Manager Software@, BookYourSite.com™ will work for you. This exposes our product and your campground to thousands potential consumer campers. If you are on BookYourSite™ then you will be at these shows. 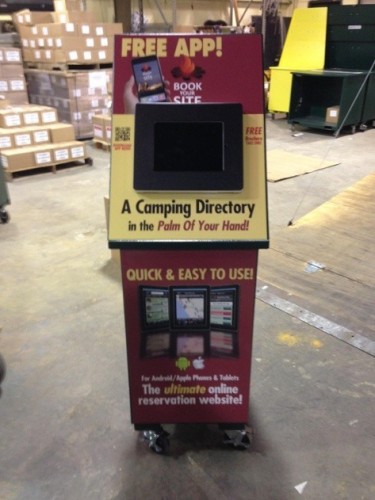 The new booth is designed to attract the interest and curiosity of the passing camper at the trade shows. It is a self serve iPad dock that encourages the trade show attendee to stop and make a reservation. Coming soon to a trade show near you!

Here is the new baby! Isn’t she wonderful! It is a self serve display that will attract thousands of eyeballs at the 24 trade shows it appears at. It exposes your rv park and campground to thousands of targeted potential campers to your park. If you are on BookYourSite™ you will be represented.

We are partners in this:
If you are not a on BookYourSite™, now is the time to join as we head into the trade show season. Call us, we are in this together.